You are here: Home / Gun laws by state

The complete gun laws by state 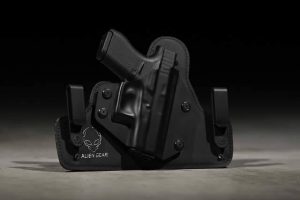 What kind of carry laws are there?

In the united states, you will find two different types of carrying laws.  open carry and concealed carry are two types.  Carry laws are left up to each state and each state can be different than the next.  All states allow for a firearm to be carried, however, some states make this process extremely difficult in terms of the application process.

If you have ever read of the may issue application that New York and a few other states are part of then you have seen this type of application.  It makes it very difficult to get approved and it must instance will have to provide a justifiable need for a carry permit.

Open carry is exactly what the law states, you can carry your firearm where everyone can see it.    The term open means to have the gun in a sling or hostler where it is readily accessible.  Do not confuse open carry with brandishing.

Brandishing is when someone has their firearm in their hands and more specifically in the pointing or firing position.  This is certain respects could lead to a serious crime.

Open carry has become somewhat more acceptable in certain areas across the united states.  For someone that has never been around someone with a firearm holstered.  Do keep in mind that most criminals hide their weapons and you never see them hostlerd in public view, but being pulled when the crime happens.

A concealed carry firearm is when someone has his or her firearm concealed from view.  Depending on what state you live in having a concealed weapon may be the only way to carry a firearm.   Concealed firearms can be on the person in the form of a hidden holster that is not in public view, or close to the person like in a bag or pack.

The below data is from the FBI Uniform Crime Reports.  This program is published yearly and collects data from roughly 18,000 plus sources around the country.  Some of the sources are from county, state, and city data.

Along with federal law enforcement agencies who provide the data voluntarily to create these reports.  The below reports are on cases committed by firearms within each state for the year of 2017.  This will give you a good idea of the amount of murder that happens by firearms each year.

How to interpret these reports

These shouldn’t be used to determine if a person has been arrested.  They only reflect crimes that have been reported by law enforcement.   Compared to the number of municipalities that do report data the reports are still under-reported.

2017 Murder Statistics by state – Weapons that were used

2017 Robbery statistics when a firearm was used

What are stand your ground laws

The term stand your ground law means that a person can respond to a threat without the fear of criminal prosecution.   A lot of self-defense laws state that a person who is under a threat has a duty to retreat.  If that person retreats and the threat continues, then that person may use force.

Castle Doctrine:  No duty to retreat before using deadly force if you’re in your yard or home.

Stand Your Ground:  No duty to retreat from the situation before resorting to deadly force.  Not limited to your home, or place of work, etc.

Duty to Retreat:  Person has a duty to retreat from a threatful situation if he or she can do so with complete safety.

The below data shows gun laws like open carry and gun permits per state in the United States.

Please keep in mind that gun laws change frequently and that this guide should be used as just that. a basic guide to see what gun laws are per state.  Even though we attempt to keep this data up-to-date it is possible that laws have changed before we can update them.  With that said before making any decisions you should check with your state or county to double check that the gun laws you see are current.

Learn more about gun types, rounds that are fired, magazine capacities, and much more.