Learn how to perform a California inmate search by searching with a first and last name. We will provide all the information anyone would need to find inmate data in California.

California inmate data is public records so remember that this data is open to view by all who looks for it.

California is one of the largest states in terms of population and prison populations. We will explore what websites to use and how to find the inmate data once the websites are accessed.

How to Perform a California Inmate Search

When searching for inmates in California you should start your search at the California Department of Corrections website. Here you can search for inmates by a first and last name.

The department provides this service as a public service for public safety. Keep in mind that these records should not be considered official records. Although the department takes every effort to keep the records updated there are times that data may not be completely up-to-date.

You can search in two ways. By a first and last name or an Inmate number. If inmates are being transferred or recently admitted this data may not be available for several days. So check back often.

Once you search and find the record your looking for you can click on the inmate’s name to open up the page on more data. Here you can find information like what facility the inmate is being held at, the inmate’s full name, parole information, and much more.

Use the technology of a search service that specializes in finding public records like inmate data. Not only can you find these types of records but you can find historical records like arrest, warrants, contact information, and much more with just a first and last name.

Most of the services provided by search services are unlimited in nature meaning you can search as many times as you like.

Inmate records can usually be found by accessing the county Sheriff’s website. Typically these websites will have an area where users can search directly online by way of searchable databases.

These searches can be run by a first and last name. Do keep in mind that there are Sheriff’s websites that do not have online searching. When this is the case you will have to call the Sheriff office directly to try and obtain these records. 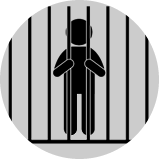 These facts and statistics come directly from the California Department of Corrections. Some of these facts may even surprise you.

Learn how many inmates are housed each year in California, and what the major offenses are that got these inmates behind bars.

The average age of Female and Male inmates

In this graph, you will see what offenses were the most and least in terms of crimes against a person, property crimes, drug crimes, and other crimes. Other crimes may include driving under the influence, possession of a weapon, escape, and more.

Remember that inmate data changes quickly and even though these databases make every effort to keep records up-to-date there is still chances the data is not current.

Because of this, you should check back frequently in order to make sure the data is current.

The above guide should allow anyone the ability to perform a California inmate search. Keep in mind that if you are looking for inmate data within Sheriff websites and you can’t find a search feature you can call the Sheriff’s office directly.