California one of the most populated states in the United States has one of the largest court systems in the entire U.S.  This guide will explain how to perform a California court records search directly online using a first and last name that can help in finding criminal records, court dockets, warrants, and more.

This guide will also explain unique ways and websites to search for public records like court documents, criminal data, and more.   Learn about the California process and statistics from a year to year time perspective. 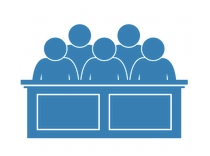 California is made up of three levels within the court system. California supreme court, courts of appeal and the Superior courts.

The superior courts in California consist of 58 trial courts, this is one in each county. Within the trial courts and superior courts a judge and in some cases a jury will hear testimony and other types of evidence to decide on cases. The CA court system serves almost 34 million people.

How to find California court records

Finding California court records can be done by accessing any of the above websites and navigating to the online records search within the court’s website. However, there are other ways by using the county clerks websites.

You would have to know what county the crime took place in and then find that county website online. To do so simply google the county + courthouse like so: “Sonoma County Courthouse”

Once you find the county courthouse you can find there online record search.

Use a search service to find California court records

The use of a search service will search names against federal, state, and county sources to help anyone find public records in California. Because this method saves an incredible amount of time it’s a favorite amount a lot of people to find and view public records, warrants, inmate data, contact information and more online.

The below data comes from the California court statistics reports.

California Filings and disposition summary from 2010 to 2017