The Ñeta prison gang began in Puerto Rico prison system. Sometimes referred to as the Ñeta Association, Associacion Ñet, or Association for Prisoners Rights. In Puerto Rico, Ñeta is the largest and controlling prison gang.

30th of each month the Ñeta come together to remember their fallen members. The 30th of March is when Irrirate the founder was stabbed and shot to death 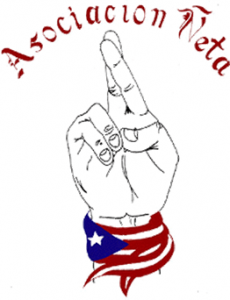 The founder of Ñeta Association was Carlos Torres Irriarte. His alias was also known as “La Sombra” which means the Shadow. Like a lot of prison gangs, the formation happens for protection. In 1970s political prisoners that were being held at Oso Blanco in Rio Piedras formed this organization for better living conditions and to also defend other inmates from abuses guards and prisoners. With that said there was another rival prison gang called G’27 or Group 27.

By the 1980’s the Ñeta prison gang become the most dominant gain within the Oso Blanco prison system. Because of the power that the Ñeta and Irriarte created he was a target of the G’27s. A plot was in place to kill him. With the help of paid off, authorities Irrirate was attached on his way back from a walk and was stabbed repeatedly and shot by a .38 caliber pistol. He was pronounced dead that day.

Markings and colors that are worn by Ñeta

The Ñeta where beads around their neck. These rosary styled necklaces typically have a cross and they are in the colors of white, red, and black. Also, clothing is typically white or the same colors as the Puerto Rican flag.

White bandannas are also worn by members. Letters ÑDC are also tattoed or worn by Ñeta members.  When members see each other they cross thier finger and put there hand over there heart to show unitity as members.  There emblem show cased above is the Puerto Rican Flag and the index and middle finger crossed.  150% committed.

How does Ñeta make its money?

Like other gangs that operate on the streets and in prions drugs are major money making opportunity for Neta. While this gang has a structure with presidents and counsel in place to make sure operations are maximized. This enterprise is involved in organized criminal activities that can include:

The Ñeta’s have an organized hierarchy

On July 12th, 2018 Four leaders of Ñeta’s Prison gang were found guilty for violation of the Rico Act in Puerto Rico. There was a 10-day trial that took place and a jury found these men guilty of racketeering and drug trafficking. This was accounted for by the United States Attorney for the District of Puerto Rico. Rosa Emilia Rodriguez-Valez.