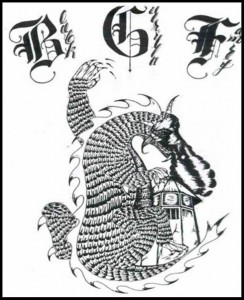 The Black Guerrilla Family prison gang is a strong and ruthless organization that has a stronghold in the federal prisons system. Also known as the BGF this African American prison and street gang was founded in 1966 in the walls of San Quentin State Prison in Marin County, California.

Like all prison gangs, the BGF expanded from inside the prison walls to outside street gangs that total into the thousands.  With this power the gan expanded on ways to make money from the robbery to selling drugs on a much larger scale.  The main rival of this gan is the Aryan Brotherhood.  These two gangs are major rivals within the prisons system today.

History of the Black Guerrilla Family

The BGF was founded in 1966 by George Jackson and W.L. Nolen while they were incarcerated while being in prison at San Quentin State Prison in California. This prison gang was founded during the Black Power Movement. Over time the Black Guerrilla Family moved more into an organized crime of drug dealings, murder, robbery, and auto theft.

How does the BGF make money?

The BFG makes money by moving drugs, auto theft, and murder. Within Prison, the BFG control many areas of the prison. It is said they have guards on their side that help in moving narcotics. Currently, it is under the assumption that most of Marylands prisons system is under control of the Black Guerrilla Family inside prison walls.

A dragon climbing a tower or the numbers 2-7-6 are the main markings you see on BFG members.

The BGF rivals and allies

Rivals of the BGF

Allies of the BGF